Dino Wars: The Trials of Terror is the second instalment in the Dino Wars Series by Dan Metcalf.  For fans of the first Dino Wars, this book does not disappoint!

Adam and his eclectic group of friends, including both humans and talking dinosaurs, are on a quest to find Dilotron Crystals to deactivate the deadly Coda Program and save the world as they know it.  They have travelled to Pteratopolis, the city of pterosaurs, on their journey as it is rumoured that a Dilotron Crystal is somewhere in the city. They must complete a series of trials to retrieve the Crystal, prove their worthiness and learn to work together. The Crystal is located deep in an underground labrynth. To find the crystal and survive the trials, Alex must learn to work with his sister Chloe.  Can these two argumentative siblings learn to cooperate or will their mission be doomed?

This book is full of action from the word go.  With a cast of interesting characters that includes talking dinosaurs, this is a book for all fans of dinosaurs, adventure and excitement. It will leave the readers gasping for more and eager for the next instalment!

An extraordinary 5 stars for Dino Wars: The Trials of Terror!

It’s Only the End of the World by J. A. Henderson

Charlie Ray is your typical 14-year old boy, except he isn’t. He’s discovering all sorts of surprising things about himself and his family. For instance, his parents are computer hackers and he has developed super powers. What in the world is going on?

Charlie meets a smart-mouthed girl called Daffodil McNugget who tells him that he is being hunted by the evil people at Manticorps and delivers a message from Charlie’s dad, telling him that he must save the world.  With the help of Daffodil and a rogue AI (artificial intelligence), Charlie must take on the baddies, help a murderer escape from prison and stop armageddon, while trying to come to grips with his new super powers.

It’s Only the End of the World is a fast-paced, action-packed roller coaster ride that will have you on the edge of your seat throughout.  With complex characters that are never quite what they seem, this story will keep you guessing all the way to the end. This book is a must read for anyone who is interested in computers, action, intrigue and world domination!

5 stars for this imaginative, thrilling adventure!

The moon was strange the night the witches came and Aunty died. When a book begins with this sentence, you know it’s going to be great. Begone the Raggedy Witches by Celine Kiernan certainly does not disappoint.  This is a truly outstanding, irresistible story of magic, mystery, good and evil.  I read it in one sitting; there was no way I could put it down!  The setting and characters are so alive, they jump right off the page.  There are so many magical characters, yet this is a truly believable story. Fortunately, this is just the first book in the series, as it will leave you craving more!

When Mup’s dad is kidnapped by witches, she discovers that she is descended from a long line of witches, something she was totally unaware of. Mup, her mam, her brother and her dog, set off to rescue her dad from the clutches of the witches in Witches Borough, not realising how much danger lies ahead.  They must battle to change a world where everyone has become afraid, save Mup’s dad and somehow stay alive.  This is the perfect story for anyone who loves magic, witches and adventure. A brilliant 5 wands up! 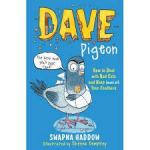 Did you know that pigeon’s are extremely cunning and hilarious?  I didn’t either until I met Dave and his best buddy Skipper. Dave Pigeon by Swapna Haddow is the hilarious adventures of Dave and Skipper as they plot to get rid of Mean Cat and take over the human lady’s house.  Even though they concoct numerous plans, nothing ever goes according to plan. Getting rid of Mean Cat brings even more trouble for our intrepid heroes.  Hilariously (and somewhat sarcastically) narrated by Skipper, this tale of long-lasting friendship and pigeon action heroes will have you rolling on the floor with side-splitting fits of laughter.  5 stars for Dave Pigeon!

The Great Chocoplot by Chris Callaghan

Imagine a world without chocolate. Impossible? Maybe not. That’s what Jelly and her Gran are facing in this hilariously whimsical book by Chris Callaghan.

“In six days there will be no more chocolate in the world….ever!”  This is the opening line from the book. I was hooked and read it in one go.  Jelly hears this devastating news and can’t believe what she’s just heard. The world without chocolate? No way!  So begins the adventure of a lifetime for Jelly and her Gran.  When a new chocolate shop opens in town, owned by Garibaldi Chocolati, just as this announcement is made, Jelly begins to smell a rat.  A trail of clues leads her in the right direction to solve the mystery of the Chocopocalypse.

A laugh a minute and a huge desire to eat chocolate; what more could you ask for? The Great Chocoplot is a huge 5 thumbs up offering from a truly whitty guy!  WARNING: will cost you extra for the chocolate.

The Boy Who Grew Dragons by Andy Shepherd

Dragons have always been a favourite of mine so when I read The Boy Who Grew Dragons by Andy Shepherd, I fell in love immediately.  With adorable dragons, fantasy and laughs a million, this book has quickly found a place on my favourites lists.

Tomas and his Grandad have an unusual hobby, they grow dragons! While clearing out the garden plot, Tomas discovers a strange looking plant covered with weird, glowing fruit.  After some research, Tomas discovers that it is a Dragon Fruit tree. Thus begins a hilarious adventure for boys and girls of all ages!  Tomas thinks it’s great having a pet dragon but it’s easier said than done! Did you know Dragon poo explodes?!  As he shares his secret with his friends, they must ban together to save all of the hatching dragons from Grandad’s grumpy neighbour Grim.

I can’t wait for the next book in the series. An excellent first book from Andy Shepherd! 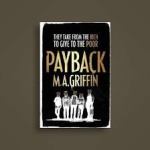 Payback is a modern-day Robin Hood story that will have you sitting on the edge of your seat and holding your breath in anticipation.  Non-stop, page-turning action makes this book a thrilling read from the first words.

Payback is a group of teenagers who have decided that they have had enough of the rich, underhanded people taking from the poor to benefit themselves. They band together to take back from the rich and give back to the ordinary people of the world. Payback is famous on the internet with one of their biggest fans being Tom.  In a twist of events, Tom becomes a member of his hero organization but brings troubles of his own in the form of Mr. Ruiz, a man who is determined to get his own revenge on Payback.

If you’re a fan of action, adventure, thrills and suspense, then Payback is definitely for you.

Today I received my first review copy of a book. I was thrilled to say the least. Then I started reading it. I was stunned into silence at the beauty of this book!

Told from the point of view of two main characters, it is the story of Stevie, a teenage girl who is living with a big secret and Hafiz, a teenage Syrian refugee.  A most unlikely friendship develops when the two are thrown together at school.  So begins a story that is both heart-breaking and heart-warming at the same time.  Hafiz helps Stevie come to terms with her mother’s crippling depression and living below the poverty line; Stevie helps Hafiz deal with the horrible truth of being a refugee in today’s world and dealing with the horrific memories of his journey from Syria, along with the fears of his parents being left behind.  Their story is told sympathetically and lovingly by Siobhan.  It leaves you rooting for them to find happiness at last and inspired to help make the world a better place. Siobhan Curham is definitely an author to have on your bookshelf!  A must read for everyone! 5 stars*****

Alex Sparrow and the Really Big Stink  by Jennifer Killick

Alex Sparrow wants to be a secret agent more than anything in the world. Imagine his surprise when he suddenly develops a peculiar ability–he becomes a human lie detector! When strange things start happening at his school, Alex gets to use his new power to solve the mystery.  The biggest trouble-makers in school have suddenly become model students.  Can Alex and his friend Jess save the day?

This book is full of twists and turns on every page.  It’s a must read for kids of all ages.  Alex Sparrow is a character that everyone can identify with, a typical boy!  There’s humour, suspense and excitement. I couldn’t put it down and the children in my class absolutely loved it. One of the best books out today!

“The Morton family are cursed. Their house is haunted by eerie footsteps, a ghostly figure and whispers in the night.”  These are the words that had me hooked before I even opened the cover of this book.  I couldn’t wait to dive in and see what awaited me in the pages of this book, even though it’s original audience is children.  When Samuel and his mother move to an old cottage in the Highlands of Scotland, he has no idea what kind of mystery lies in store for him.  Having only the 3 children of the Morton family for company, Samuel begins to visit their ancient family home of Dunaad House, where he befriends Fiona, the youngest child.  Always having the feeling that he is being watched, one day he sees a mysterious figure of a woman in the window looking down at him. Thus begins a search for this mysterious woman that will lead Samuel and Fiona on a journey to discover betrayal, revenge and hidden family secrets. Can they find the answers in time to save the next generation of the Morton family from the curse?

I highly recommend this book for anyone who enjoys a good mystery and ghost story. A huge 5 stars!!!!

The Final Raven by Finian Black

If you love Arthurian Legend, Merlin and magic then this book is for you. I was hooked from the first sentence and just couldn’t put it down. Set in modern day Britain, it’s a tale of mystery, legend, action and thrills. It’s a fascinating read, written by a master story-teller. Five stars to Finian Black and The Final Raven.

A mysterious plague is sweeping across Britain causing people and birds to die. The ravens at the Tower of London are falling victim to the plague one by one. If all of the ravens die, according to legend, the kingdom will fall. 15 year old Luca Broom is charged with the task of saving the ravens and mankind.  When his mother is rushed to hospital with the plague, Luca is swept away by a mysterious man to to a cavern hidden deep in a mountain. There he begins to learn his true identity as a child of Camelot.  Along with a rag-tag band of other children, Luca must discover how to stop the plague and save the ravens.